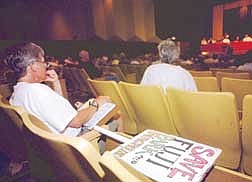 photo by Brian CorleyDeni French sits through last night&#039;s meeting of the Board of Supervisors which met to determine the future of Fuji Park and the Carson City Fairgrounds. French spoke in favor of protecting the park and fairgrounds and keeping them together at their current site.